Díbe: A Navajo Way of Life

The Navajo Nation is a culturally rich tribe. Over time the Díne shifted from a raiding lifestyle to an agricultural society. The shift to a pastoral and agricultural lifestyle created an opportunity for the Navajo to become one of the most modernized Native societies in the United States. Mrs. Castillo, a well-known sheep owner from Window Rock, AZ states, “Sheep have fed us, they have kept us warm, and they have made us money.” But what is this animal’s story? I have interviewed Navajo Sheep Ranchers to help us understand why the sheep plays such a pertinent role in Navajo culture.

History of the Sheep
According to the Navajo Sheep Project:

In 1538 Hernando Cortez brought the first sheep to his home in Cuernavaca (near Mexico City). The first sheep were brought to the “New World” during the search for the Seven Cities in the 1540’s. The churro sheep was one of the breeds taken along.

After Coronado abandoned his search, he returned to Spain leaving behind some churro with the Pueblo people near Acoma. Trades were made allowing the churro to end up in the Navajo’s possession. Since then the Navajos have become quite unique by combining modern ranching with traditional ways of caring for livestock. Though many different types of livestock have been introduced to the Navajo Nation, such as cattle, horses, and even llamas, the sheep has a long history with the Navajo. The sheep has made the Navajo their livelihood. The Navajo rug, for instance, is one of the most beautiful pieces of art that has come from the Navajo. The introduction of the Navajo Churro could be called revolutionary because it allowed Navajo to become a self-sustaining people. Nearly 150 years has passed since the introduction of the churro, and the Navajo continue to steadily increase their herds. The Navajo Sheep Project states:

As trading increased so did the population of the churro. Agents of the Indian Bureau saw this increase in both Navajo Livestock and Anglo stockman in South West New Mexico. It was apparent that the range was not able to handle the increasing population. The BIA instituted a program for both soil and range conservation, which involved a heavy reduction in existing herds and flocks. Few Navajos understood why this plan needed to be put in place.

Range Fed
Range fed sheep have a higher nutritional value and have established a higher market value. They also build up a natural immunity to some illnesses, therefore there is no reason to treat them with antibiotics or other drugs. According to the Tribal Ranch Manager at the Navajo Nation Department of Agriculture, Ivan Becenti, “Grass-fed is becoming a buzz word fast, which could also be called organic.” People have different interpretations of what grass-fed should be, which is why creating a label for grass-fed is proving to be  controversial.

USDA has set a standard for labeling a “grass-fed ruminant, which includes that at least 80% of that ruminant’s primary energy source be composed of pasture, range, grass or other forage.” Grass-fed animals will generally grow more slowly than those fed corn-fed diets in a feed lot, due primarily to the high moisture content of fresh forage. Carcasses are based on weight value, making feed lots more viable because the animal reaches market weight sooner.

According to the USDA:

The Navajo reservation covers 27,413 square miles. A majority of the sheep ranchers on the reservation are elderly. The ranchers usually make trips into town once or twice a month to stock up on personal supplies for the month to come. With a poverty rate of 42% on the Navajo Nation and rising corn prices, range-fed sheep may be more economically viable than grain-fed sheep.

Family and the Churro
Churro were bred primarily for their wool. The churro wool was in high demand because of the many colors it offered. The men support the wool infrastructure and interface with the outside economic factors. Young people are often involved in traditional life through activities related to sheep and fiber arts. The Navajo have established a program to prevent the extinction of the Navajo Churro breed. Management plans are being implemented to sustain grazing pastures encouraging the reeducation of lost traditions in the Navajo culture due the near extinction of the Navajo Churro on the Reservation. 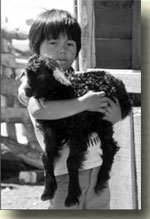 Mr. and Mrs. Castillo, both sheep owners in Window Rock, AZ, say, “The Navajo believe that the sheep is sacred, that they are weaved into their lives like the wool in the strongest rugs. The churro symbolize wealth, a good life, harmony, and balance of land.” The more sheep you have, the more affluent you are culturally and economically. This ideology is one of the reasons the Navajo Nation is overpopulated and overgrazed with sheep. Sheep are owned almost exclusively by women because the women do the weaving. Sheep ranchers own hundreds of sheep, caring for and managing their herd daily. Due to the large herds, many of the once green pastures have become overgrazed. Range management plans were not implemented until after the 1930s, but are now becoming more common.