Gorillas in the Garden?!

Normally, the term guerrilla invokes thoughts of sneak attacks and rebel soldiers but in a different context, guerrilla gardeners use a similar tactic of rebellion to address urban food issues, land use, and aesthetics. Guerrilla gardeners are independent fighters taking on a larger cause for food access and zoning bureaucracy concerning wasted and neglected spaces. They are the people who cultivate food access and the way we use our urban land via voluntary gardening in spaces deemed public. These spaces are ones which would otherwise go to waste as vacant or unused areas of land. Operating under the notion of spacial justice and freedom, guerrilla gardeners take up their tools and seeds rather than weapons in order to reclaim spaces and reform them to create a healthier community.

The term guerrilla gardening was first coined in New York in the 1970s when an activist named Liz Christy and friends took over an abandoned lot to cultivate fruits, vegetables, and herbs. Their group termed themselves Green Guerrillas and from there, the cultivation of public and civic land took flight as a form of addressing local food production in response to resource peaks across the globe. Guerrilla gardening has now become a grassroots movement that seeks to build community and food accessibility without asking for permission.

To get an idea of the current practice of guerrilla gardening, I watched a TED talk by Ron Finley about incredible possibilities of expanding rebellious cultivation through work he has done in South Central LA. According to Finley’s TED talk, 26.5 million Americans live in a food desert, a place where affordable nutritious food is hard to obtain. After realizing what this meant for his community, Finley and his group took over a curbside strip of land by his house and started planting a food forest. Rather than wait for a solution, Finley chose to “manufacture his own reality” and use the soil as his canvas and gardening his “graffiti.” With the example he put into practice, he hoped to inspire similar actions on grander community scales with the proof that his methods work.

As a global movement, there are plenty of groups you can get involved with in order to communicate this peaceful resistance to large scale food systems. By linking up with www.guerrillagardening.org, users can find the footprints of fellow guerrilla gardeners in virtually any place. Started by Richard Reynolds in London, http://www.guerrillagardening.org promotes the larger community of rebel gardeners seeking solutions to the current status quo of our global food system. 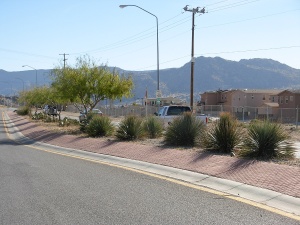 In my search for guerrilla gardeners in the Albuquerque area, I used the site and found information on work done by a former Albuquerque resident, David Cristiani. I was able to interview Cristiani over the phone and gathered information about how as a landscape architect working with Southwest landscapes, Cristiani made his mark in rethinking our landscape. After driving by the same poorly landscaped medians every day on Central and Tramway, Cristiani decided to take action on his own by planting Albuquerque native plants and trees during rush hour traffic one day. He wanted people driving by to see what he was doing and understand the importance of native species to our water thirsty area. Being familiar with Albuquerque native plants, he chose species that survive naturally on our region’s minimal rainfall. Cristiani questioned the status quo of unsustainable landscaping and wasted space, and was able put into practice some lasting changes in this Albuquerque median.

Although the plants he chose were not edible, Cristiani shared a lot of information with me about edible plant species native to the Albuquerque region and discussed the possibilities for a future food forest in our city. From honey mesquite to wild spinach, the options for creating edible spaces for our city are wide. Cristiani also shared sources on Brad Lancaster’s rain harvesting work towards creating a desert oasis in Tucson, Arizona. In order to make revolutionary changes using sources of life around in each region, Lancaster advocates for capturing water that would otherwise be running off and evaporating to use for growing edible plants within the public domain. A short film about his work, Free Water, shows how small changes in our infrastructure can lead to abundance versus scarcity in a desert.

When we mesh these ideas together, they become much more cohesive and viable options for change in a desert climate. By following the examples of individuals like Finley, Cristiani, and Lancaster, we can apply the changes we wish to see in the world by living and practicing those changes in ways that reach beyond personal gains. In a simultaneous act of defiance and community engagement, guerrilla gardening transforms our “not my problem” attitude in the public realm into a tool for broadening our awareness and caring for our neighbors as well…all while providing food along the way.

1 Response to Gorillas in the Garden?!