The Illusion of Choice in American Supermarkets

Supermarkets in the United States are a sight to behold, and a cultural experience that is hard to separate from the American identity. After all, a popular patriot’s tale tells of former Soviet president Boris Yeltsin’s visit to a Texas grocery store in 1989, and his subsequent reformation of the U.S.S.R after his dizzying encounter with the cornucopia of options on the shelves. One need only peruse the candy aisle of the nearest Smith’s to realize that we are truly spoiled for choice.

This level of abundance, however, comes with a caveat that many shoppers are unaware of. A large majority of the brands and packages lining grocery store shelves are owned by the following ten companies: 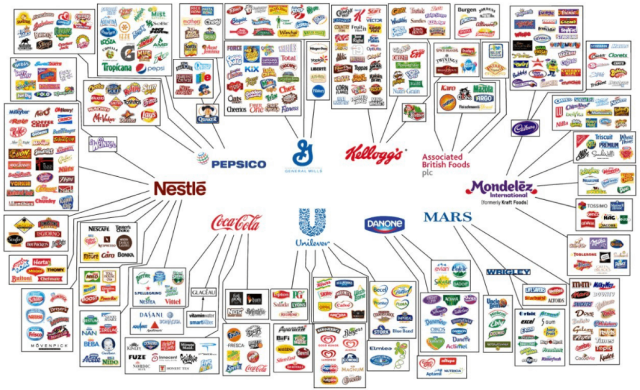 Many of these companies even own subsidiaries that appear to be in competition with each other. Cascadian Farms and Annie’s Homegrown are both brands marketed as small-scale, organic, wholesome alternatives to the typical cereal selections found in stores; yet they are both owned by General Mills, the company that supplies over 27 percent of the other cereal brands in the aisle.

In the vast world of multinational food distribution, every dollar is a vote. Customers can choose to support companies and practices that align with their beliefs and distance themselves from those with controversial track records. Ranging from palm oil deforestation, drying up local watersheds, and even the presence of glyphosate in breakfast cereals, all ten of the above companies have been embroiled in their fair share of scandals; not to mention their significant contribution to the industrial agriculture system, which contributes its own host of problems.  With the success of services like Buycott and Ethical Consumer magazine, it is clear that interest in socially responsible shopping is on an upward trend. According to a survey by labor market research platform Clutch, “more than half of people (59%) are likely to stop shopping at a company that supports an issue they disagree with”, while “three-fourths of people (75%) are likely to start shopping at a company that supports an issue they agree with.”

For example, many customers choose to boycott Nestle due to the company’s history of controversial business practices, including the restriction of water rights in developing countries. This buying habit is much easier said than done. While some of the brands in the graphic below clearly display the company’s name, there are countless others that an unaware shopper might easily miss, especially since they are marketed to such broad and diverse segments of the population.

Some of Nestle’s holdings, including those not relegated to the food industry. Image credit: ZME Science 2020

It is important to be an informed shopper, especially in the obfuscated world of modern food production. As the list of subsidiaries of a particular corporation starts to gradually reveal itself, it can become harder and harder to shop sustainably. Images of family-owned organic farms found on many health food brand’s packaging might in fact be hiding monoculture farming that damages soil health and local ecosystems. When a shopper chooses an organic option in order to reduce their contribution to pesticide use on farms, they may be supporting an umbrella corporation that employs those same pesticides in all of its other food production operations. While a brand might broadcast its commitment to sustainable resource use, its parent company is more likely to be a major player in the industrial agriculture system, which uses water and topsoil at unsustainable rates.

Another Food and Water Watch table showing the consolidation of the industry.

The disconnect between the average grocery shopper and their food sources is greater now than ever before. Even finding out where your food comes from can be an endeavor, and an extremely important one to undertake at that. It is, after all, the first step to maintaining a sustainable diet.

WHAT CAN YOU DO?

If you find it startling that two corporations can control 61.1 percent of the cracker sales in the U.S., or that it is a Herculean task to find a beverage in the gas station that wasn’t manufactured by Coke, Pepsi, or Dr Pepper Snapple Group (hint: It’s Shasta), then here are some first steps you can take to reconnect with where your food comes from.

The most effective solution would be to simply remove processed foods from your diet. You would not only be cutting ties with the gigantic multinational enterprises that produce these foods, but you would impact long-term environmental health (in a small way) as well as your own continued health and well-being (in a big way). With that said, it is not always feasible to implement such a drastic change (or even desirable – as New Mexicans, I’m sure we all want salty tortilla chips to go with our salsa, but we don’t always have time to make them ourselves). If you are like me and wish to regain control over the foods you buy but don’t have the time or resources to cook 100 percent of your meals from whole foods, consider joining a local grocery co-op. Here you are much more likely to find local, small-scale, organic, and even healthful brands that actually practice what their marketing promotes. Another option is to join a local CSA, or buy produce from farm stands and grower’s markets.

However, if none of these approaches are practical and you wish to continue going to your nearest grocery store (and saving gasoline in the process), don’t fret. As hard as it may be to find, the manufacturer of a product will always be listed somewhere on that product’s packaging, typically on the sides near the bottom. And while there may be a subsidiary or two in the way, barring you from discovering the true producer, Buycott will often do that detective work for you. Even if the particular brand itself is unimportant to you, the app will list campaigns that users can sign up for, oftentimes exposing companies that have been criticized for socially irresponsible business decisions.

While it may be harder than ever to untangle the complex web of American food production, we are fortunate enough to live in the information age; with a little time and effort, you can rediscover where your food really comes from.