The term allergy is used quite often, but what exactly does it mean? An allergy is another word for rhinitis, which means “inflammation of the nose.” It refers to the reaction of cells in one’s body to irritants, or triggers, that result in the release of histamines and other chemicals. These chemicals present symptoms such as swelling, itching, hives, and, in severe cases, a fatal shut-down of the body known as anaphylactic shock. Unfortunately, seasonal allergies have increased over the years, as have food allergies in children by almost 50% between 1997 and 2011.

Have you ever gotten itchy eyes in the spring? Or cannot seem to stop sneezing when you’re outside? Many people possess seasonal or environmental allergies that cause them to react to particles that float around in the air. One of the most common environmental allergies is pollen. To combat this allergy, many will visit a clinic and get multiple shots to slowly build up tolerance to specific allergens that are contained in the shot itself. Similar to this process, ingesting local honey can combat a pollen allergy in the same way. Bees collect pollen from flowering plants, shrubs, and trees, many of which contribute to seasonal allergies. According to Mark Sisson of Mark’s Daily Apple, one should start by ingesting small amounts of honey, about ¼ of a teaspoon daily, and increase the dosage gradually each day to build tolerance. In a study conducted at the International Islamic University Malaysia, those who were treated with high doses of honey showed progressive improvement in their allergy symptoms. So, next time you have itchy eyes when going outside, try a daily dose of local honey to build your tolerance to the allergens around you.

This is my favorite local honey that I use to build my tolerance to seasonal allergies. Purchased at The Los Poblanos Farm Shop. Photo by author.

Food allergies are another issue. Some are minor with itchiness and hives while others are severe, resulting in anaphylaxis or death. Sometimes, even when a food one is allergic to touches another food that is consumed, an allergic reaction can still occur. This is called cross contamination, and may occur within a facility that processes many different products. When food is processed in a factory, there is a possibility that threatening foods that are processed on the same equipment can come in contact or contaminate other products. 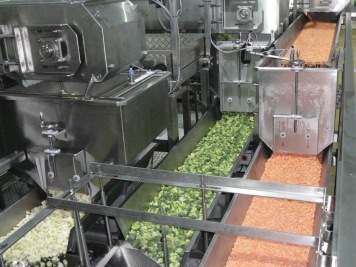 Whole foods are foods that are as close to their natural form as possible that undergo only the bare minimum of processing or refining before being consumed. In a study published in the Allergy and Clinical Immunology Journal, babies who were fed home-prepared, unprocessed foods possessed fewer food allergies through growth compared to babies who were fed processed foods. Therefore, not only can whole foods help those who possess food allergies, they can also prevent food allergies from developing in the future.

These children eat whole apples as they come straight from the farm and skip the processing facility. Photo by Bellamy’s Organic.

A sustainable way to get your hands on whole food is by purchasing from small, local farmers. This is because near-by, small-scale farms offer products that undergo little processing. Also, because small-scale farmers tend to sell their products directly to consumers, they are able to avoid middlemen and thus, they can offer higher quality, fresher products. In addition, a small, local farmer may be easier to contact than a larger, more distant producer. If needed, one may even be able to see the food they are going to consume throughout the growing and production process, while being able to ask the farmer direct questions about the product.

I experienced this when I visited a local Albuquerque farmer, Lorenzo Candelaria, and his farm in September of 2017. I helped work on the farm for a day and was able to view and see the food and saw everything that occurred to it. It was a transparent experience as not only was I able to see the food but I was able to ask Lorenzo directly about the produce.

Allergy precaution is a very important issue and local, whole foods can provide a solution. I speak from experience as I possess more than twenty different food allergies – one of which is fatal – and numerous environmental allergies as a result of an anaphylaxis accident in April 2015. The potential for cross contamination has caused me anxiety, especially when purchasing from large-scale grocery stores and chain restaurants because I had no idea where my food was coming from. I was terrified of losing my life over a meal or a snack, and developed an anxiety connected to every meal I consumed. Explaining my allergies to another person was another challenge as I feared others would not take the issue as seriously as I did. I would explain my “allergy card” that I made to waiters and waitresses in hopes that I would receive serious answers about the food I was ordering.

My allergy card that I would present to servers at restaurants. The class indicates the severity of each allergy. Photo by author.

I began to purchase local and whole three years ago. This helped me feel less anxious about my food and also significantly improved my health. I knew that if I had a question about the food I could easily get in contact with the grower. I had developed facial swelling and abdominal pain that is now almost absent. I cook healthy, nutritious meals at home with my family. How did I make this shift? I found the local hotspots, co-ops, and growers’ markets near where I live, my main stops being the La Montanita Co-op and the Downtown Growers’ Market. I created the habit of cooking at home by researching recipes, mostly on Pinterest, that contained the local ingredient I would purchase at the co-op or the market. I fell in love with the cooking and experimenting process as well as using cooking as a time to spend at home with my family while also helping them eat healthier. A couple of my favorite recipes include roasted carrots, lettuce-wrap tacos, and shaped chocolates.

Lettuce-wrap tacos made tomatoes from the Downtown Growers’ Market. Photo by author.

Shaped chocolates made from Chocolate Cartel’s Organic Dark Chocolate purchased from the La Montanita Co-op in Nob Hill. I cut the chocolate bar into chunks, added a teaspoon of coconut oil, and microwaved for 30 second intervals until melted. I poured the melted chocolate into shaped silicone molds and removed when dried. Photo by author.