The ultimate goal of farming is not the growing of crops, but the cultivation and perfection of human beings.
– Masanobu Fukuoka, the One-Straw Revolution –
Quoted by “Lo,” a Feed the Hood farmer

You may have seen Project Feed the Hood (PFTH) at last year’s Lobo Growers’ Market. If so, you – like many others – may have been curious as to what they do. PFTH is one of the great grassroots organizations building community throughout Albuquerque. They have been focusing on food literacy and food justice in the Albuquerque area for four years.

As an initiative of SouthWest Organizing Project (SWOP), Project Feed the Hood developed their organization through a desire to work with diverse cultures and a passionate belief that food markets should be within walking distance to all residents, allowing for equity of access. They believe that automobile ownership should not be a prerequisite to purchasing healthy food. Areas that do not have equitable access to food and are known as food deserts. This means that both adults and children do not have many nutritious options because there is not a supermarket within three miles of where they live. Their only options for food are often just local convenience stores.

These unhealthy options contribute to health issues, such as obesity and diabetes, that plague the population in these areas. Unfortunately, many of these food desert neighborhoods are in lower socio-economic areas with large Hispanic and ethnic populations. These are target populations that often experience food insecurities. PFTH also believes that children should be taught from the beginning about the importance of healthy food in growing up big and strong. Not only that, but they should know how to grow it as well.

Initially, Joaquín Lujan, a community organizer, asked if Travis McKenzie and Rodrigo Rodriguez wanted to assist with a gardening project at a local small church located on the Westside of Albuquerque. This garden was in a food desert area, and led to the development of Project Feed the Hood. The project was the catalyst for their mission with food and social justice para la comunidad (for the community).

Utilizing SWOP’s connections, PFTH partnered with community members in Albuquerque’s International District and City Council representative, Rey Garduno, to procure the International District Garden off of Gibson, on the corner of Ross and Wellesley. The garden has been a great success! In addition to the community garden, PFTH works with over seven schools around Albuquerque to install gardens and assist with integrating them into school life.

After three years with these initiatives, Project Feed the Hood started a farm in the South Valley, Feed the Hood Farms (FTHF), where they grow a large variety of seasonal vegetables and raise laying hens.  FTHF is working towards making PFTH’s community initiatives economically sustainable through the use of funds earned from produce and egg sales. It is also an opportunity to create sustainable jobs and continue developing the South Valley’s foodshed. FTHF has a farmstand that operates at the SWOP office (downtown, near 10th & Park) through the growing season in addition to engaging the community at the Nob Hill Growers’ Market and the Lobo Growers’ Market. They offer free workshops throughout the year in all topics of gardening, with a focus on teaching others how to grow their own affordable, nutritious food.

Last fall, we gathered with Project Feed the Hood at the International District’s annual community garden “Pumpkin Smashing” event.  All ages participated in pumpkin pie eating contests, pumpkin throwing and the smashing of pumpkins with pitch forks, shovels and sledge hammers. Everyone had a great time. Lo was asked how he feels about the work that they are doing, and he responded that it is very satisfying to see the change that happens within communities when people are working together to grow food. 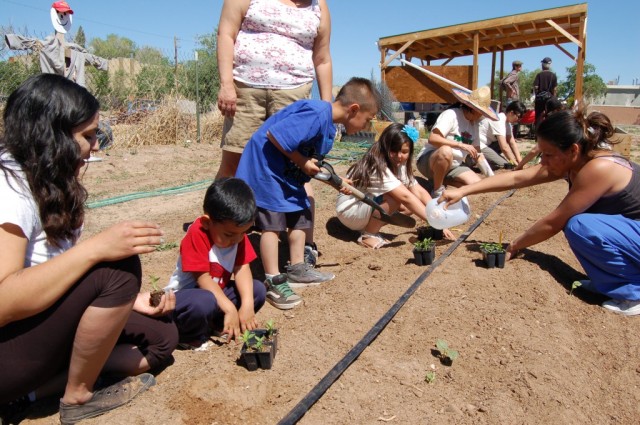 Food access and food justice offer individuals a deep sense of cultural pride and community building. Most importantly these tenets teach healthy nutrition and make good nutrition a reality. Feed The Hood continues to meet their mission through hard work and dedication to community members. Their future hopes are to further integrate themselves into local communities and to continue spreading the word about affordable nutritious food.