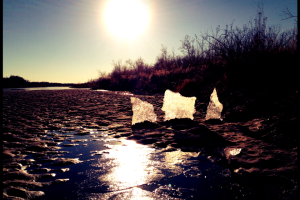 Building ice sculptures in January in the Corrales Bosque. Photo by Stephanie

“We used to run on down there to the river when it got low and jump in; we would cover ourselves with mud and play like we were Greek gods and goddesses.  Honey, we thought we were somethin’.  We would watch the silvery minnows and make them our subjects; this was before they were considered an endangered species, of course”

Evelyn Losack, a local Corrales farmer, recalls her youth growing up in the Rio Grande Valley. Evelyn is a Corrales farmer and concerned citizen. Some of this concern springs from her observations of the evolution of entertainment technology and its impact on how children play.

This picture of children spending their days outdoors used to be as common as yucca in New Mexico up until recently, when technology began beating out nature in its quest to gain the attention of youth. Richard Louv, the author of Last Child in the Woods, has coined the phrase ‘Nature Deficit Disorder’ (NDD) which describes the human costs of alienation from nature, diminished use of the senses, attention difficulties and higher rates of physical and emotional illnesses detected in individuals. He explains how children who spend a majority of their time inside playing video games and watching TV are not only missing out on the abundance of learning experiences found in nature, but are beginning to become disconnected with their natural surroundings.

In regards to sustainability, NDD’s premise is that these children will grow up to be adults that have no relationship with nature. They will have no emotional attachment to the forest behind their family’s house, the trees in the playground, or the flowers in the garden. They will not respect the natural environment around them and therefore they will not care or advocate for it.

In New Mexico today, schools, youth groups and government organizations are working to reverse this trend and bring children back out into nature. The Sierra Club in New Mexico is at the forefront of this movement with the Leave No New Mexico Child Inside Coalition. The Sierra Club partners with environmental educators, community-based organizations, health organizations, state agencies and outdoor recreation groups as well as Latino and Native American advocacy groups and faith-based communities to reach out and achieve their mission. One of their most recent successes comes from their partnership with the Sandia Mountain Natural History Center where students from many Albuquerque Public Schools and other local schools come to hike in the Sandias and learn about local ecosystems. Since it began in 1994, the center has served 198,932 New Mexican students; 10,302 during this school year alone. Their mission statement is “to develop an ecologically literate citizenry.”

Another group working in Albuquerque is BEMP, or the Bosque Ecosystem Monitoring Program. This program is a joint project through the University of New Mexico and Bosque Preparatory School where K-12 students perform research and collect long-term data about the Rio Grande River Bosque. Dan Shaw, the co-director of the program says, “students can be involved in meaningful ways in the conservation and stewardship of the living river that sustains us all.” This program is almost two decades old and growing. Every single month, there are at least one thousand students out on the landscape doing some kind of monitoring; collecting core weather data, monthly precipitation or measurements of forest production.

These are only a couple of programs going on in New Mexico. Diane D. Denish, former Lieutenant Governor, said “Outdoor experiences help children develop healthy bodies and minds. Kids need more ‘green time’ and less ‘screen time’ in order to gain a sense of ownership and responsibility for their natural environment.” This movement can begin with the community, schools and parents.  Make a point to encourage youth to play and explore outdoors. This relationship they build today with nature will help protect and sustain our planet in the future.