Corn, also known as maize, has been a foundational part of Native American, Aztec, Maya, and other cultures across the world. These cultures each believe in corn deities — many of which are associated with fertility — and have created stories of planting, growing, and harvesting corn. Mayans created their calendar on the planting season of corn and believe that they were fashioned from corn. Native Americans have dances that are specifically for the health of the corn. Corn is not only worshiped, but is also a staple food that gives us nutrients we need.

Corn is a traditional food of New Mexico — one of the foundational three sister foods, along with beans and squash. Chicos are fire-cooked corn that are dried and preserved for use in stew and other dishes. Chicos are a part of both the Hispanic and Native American cultures in the Southwest region, where food is symbolic of togetherness. Smoking and drying corn is an important ancestral food preservation tradition. Lois Ellen Frank, a Santa Fe based chef and native food historian, provides a brief history of chicos.

As a member of Sandia Pueblo, I have grown up around agriculture and have been a part of making chicos many times — each time with different harvests and conditions. This process has been a joyous occasion that can be either a family or community gathering. Everyone can walk away with a piece of life from the garden. Making chicos requires hard work, and it starts from the seed. Weeding, watering, and time spent in your garden all gets rewarded with a value-added product like chicos.  The tradition and culture of chicos has given me a sense of what our ancestors did to preserve food. The taste of chicos is like no other way of cooking corn: the earth and fire give it a certain smoky earthy taste that you can’t get anywhere else. My favorite part of making chicos is picking the corn with family and trying not to get lost in the paradise.

To make chicos you will need corn, corn stalks, a shovel, big rocks, rebar, tin sheets, water, and dirt. First: dig a pit of any length that is at least 3 feet deep. Start a fire in the pit, and allow it to burn for 5 hours. Once coals have formed, you’ll have ample heat for cooking. While the coals are forming, put the ears of corn in buckets to be soaked in water. Next, cover the coals with corn stalks so the corn won’t burn. Once the stalks are down, cover the pit with tin sheets, leaving an doorway opening through which to put the corn and water.

Putting the soaked corn into the pit

Covering the tin with dirt

Steam will rise out as soon as water is put in to the pit, so the key to the process is to quickly cover the corn once water is added. Another trick is not to put too much dirt on top of the tin sheets because uncovering them will be arduous and you may get dirt in corn. The hardest part of this process is putting the corn in the pit quickly so as not to lose any steam. This process is an all-day event or could be done overnight. Below is a video of the setup preparation on how to make chicos.

The success of the cooking phase all depends on the steam and pressure; if it is high, the ground and tin will rumble, this is an excellent sign. Once the corn has been cooked for four hours, the next step is to uncover the pit by taking the dirt off the tin sheets, so dirt does not fall into final product. We would drive a flatbed as close as we could to the pit to put the corn on and wipe away any dirt that got on them. After collecting all the corn, we do one of four things; give it away to the community, hang it to be dried, eat it straight off cob, or prepare a meal with it. The way I prepare chicos is by cutting the corn off the cob and mixing it with squash in a pan. I cook it until soft and serve it with beans and tortillas. Michele Ostrove’s article in New Mexico magazine offers a variety of recipes for adding chicos to your cuisine. 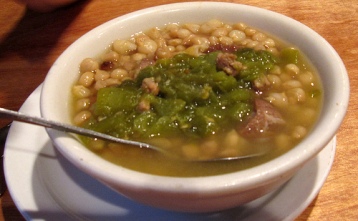 Stew with chicos. Image from: foodgps.com