New Mexico is the only state that has a state question, and it’s a question anyone who lives here is familiar with: “Red or Green?” The question refers to what kind of chile pepper you’d like your food slathered with. Abigail White, a proud Burqueña, believes in the importance of this question. “If New Mexico had a dating app, your chile preference would be the first question,” she says. It’s emblematic of how important chiles are to New Mexican culture. “New Mexico chile is what sets us apart from all the other states. It’s a huge part of our history and culture. It’s something that New Mexicans can be proud of. Plus, it’s a staple crop,” says White.

It’s tradition in New Mexico to dry red chiles and hang them as ristras. Image by Nicole Curtis Ammernan via santafe.org.

Indeed, the New Mexico chile has a long history in the state. The chile plant was introduced to the region by Spanish colonizers, who brought the plants from the Aztec empire. The plant became popular throughout the world for its ability to add flavor to cuisine. However, the chile as we know it was developed in 1888, by New Mexico State University agrarian Fabian Garcia. His varieties were bred for flavor and had a better yield. These varieties earned the love of New Mexicans. Then, spread throughout the country. Now, chiles are often produced to be eaten on their own or in the form of a seasoning like paprika. They are also used in a value-added product like salsa or hot sauce. Or even as animal feed. Chiles have become their own sector of the economy. NMSU even has its own Chile Pepper Institute, dedicated to developing further chile varieties and solving the problems associated with growing these plants. And these problems are numerous. Despite the chile’s status as a staple crop of New Mexico, the industry is struggling. 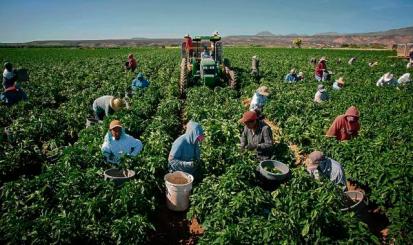 Workers harvesting green chiles. It is a labor-intensive process that must be done by hand. Image by Jett Loe/Las Cruces Sun-News via Abq Journal.

Over the past decade, the amount of chile being produced and exported from New Mexico has dropped. In 1995, there were 21,760 harvested acres of chiles. In 2017, that number had dropped to 7,600 acres. That’s an almost 70 percent drop. The same trend is true for the tons of chiles produced. In 2004, 106,850 tons of chiles were produced in New Mexico. But by 2014, only 58,700 tons were produced. There are a number of factors explaining this trend. For one, New Mexico is being outcompeted by foreign countries. As of 2014, the top chile producing country was China which produced 16.1 million tons. Mexico is a distant second, producing 2.7 million tons. The US is only the seventh largest producer with 0.9 million tons, of which New Mexico produced 6.5 percent. Chiles are too delicate to be harvested by machine; they have to be picked by hand. So, come harvest season, a lot of labor is required. In Mexico and China that labor is much cheaper than in the US. New Mexican chile farmer Shane Franzoy told NPR, “We’re paying $7.25 an hour, and we’re competing with $7.25 per day in other countries or even less.” Which makes his chiles more expensive for processors.

One disease that often kills the chiles is blight, which strangles the plants’ stems. Image by Debby Roos via NC Cooperative Extension.

Competition is not the only thing causing the New Mexico chile industry to decline. Drought, disease, and pests are also at fault. Chiles are sensitive to drought and must be watered precisely. But, this is a difficult endeavor that also racks up the water bill for producers. Drip irrigation could be a cheaper alternative, but chile fields are generally flood irrigated. Additionally, the threat of diseases and pests hinders productivity and requires a strict crop rotation. All are things that make growing chiles, particularly in a lucrative or sustainable way, challenging.

Still, the market for chiles is growing. And many are working to ensure that New Mexico’s industry grows as well. Recently, the New Mexico Chile Advertising Act, requiring sellers of chiles to label where they’ve been sourced from, has gone into effect. So that consumers know when they are truly getting a New Mexico chile with all its unique flavor and value. And there has been a push for more agritourism surrounding the chile. Like the Hatch Chile festival, which brings thousands to eat and celebrate the chiles. Also, there is hope that the NMSU Chile Pepper Institute will create a hardier variety that can survive a machine harvest. Or a pepper more resistant to drought and pests.

Chile rellenos are one of the most famous chile dishes. In New Mexico, you will get it proudly slathered with red or green chile. Image by Flickr/eekim via NewsCastic.